I’ve been thinking about hacking Symbaroum’s Corruption into 5e by introducing the following mechanic to my game. Let me know if you can think of a more simple way to have a similar effect.

All players begin with a Shadow Threshold of 5.

Shadow Damage occurs when an adventurer is exposed to corrupted forces, places, and powers. You may recover Shadow Damage by performing complex rituals, burning ceremonial herbs, resting in sanctified places, or visiting blessed healers. Actions that give Shadow Damage:

Example: After spending 3 nights in the dark heart of the woods, each character has taken 3 shadow damage. During the morning of the 4th day, the party finally stumbles upon the source of corruption. The harmful radiation of the artifact penetrates their armor, making them feel as if they are freezing, they all take 1 shadow damage immediately bringing them each to 4. The wizard is prepared for this, and throws a specially crafted cloth over the artifact. As soon as it is covered, the adventurers all breathe more easily and the woods around them seem to brighten.

Later, the party takes a short rest and the wizard spends some time meditating with the artifact. His meditations are filled with visions of snow and ice. (The GM does not tell the wizard any specific mechanics about the special abilities of the artifact, only flavor) The wizard decides to attune with the artifact, this gives him one Shadow Scar but does not give him additional shadow damage.

In the next scene, a rival party of explorers stumbles upon the group. They demand that the artifact be handed over. The wizard exposes the artifact, which is no longer harmful to the group as it has been attuned. He unleashes the power of the artifact on the rival adventurers, despite not knowing what it will do. The GM forces all party members except for the wizard to make constitution saves against the arctic chill, likewise rolling saves for each of the rivals. Those who fail freeze solid (5d10 cold damage), half taken on save. The wizard does not take cold damage, but does take 1d4 shadow damage taking him over his Shadow Threshold. He takes another scar as a result of his Shadow Damage exceeding his Shadow Threshold, and his veins blacken and grow pronounced through his skin as he is now temporarily Shadow Marked. The GM then explains the rules of the artifact ability (all other targets within 60 ft of wizard take 5d10 cold damage, constitution save vs. DC 18 for half.)

The cleric has survived, and rifles through the rival parties gear for the ceremonial herbs that they stole from the group earlier. When he finds them, the group takes a short rest as the cleric cleanses the souls of each surviving party member. The wizard’s black veins fade back to normal after the ritual, but now that he has 2 shadow scars he cannot fully heal. Every party member now has 0 shadow damage, except for the wizard who still has 2 shadow damage. 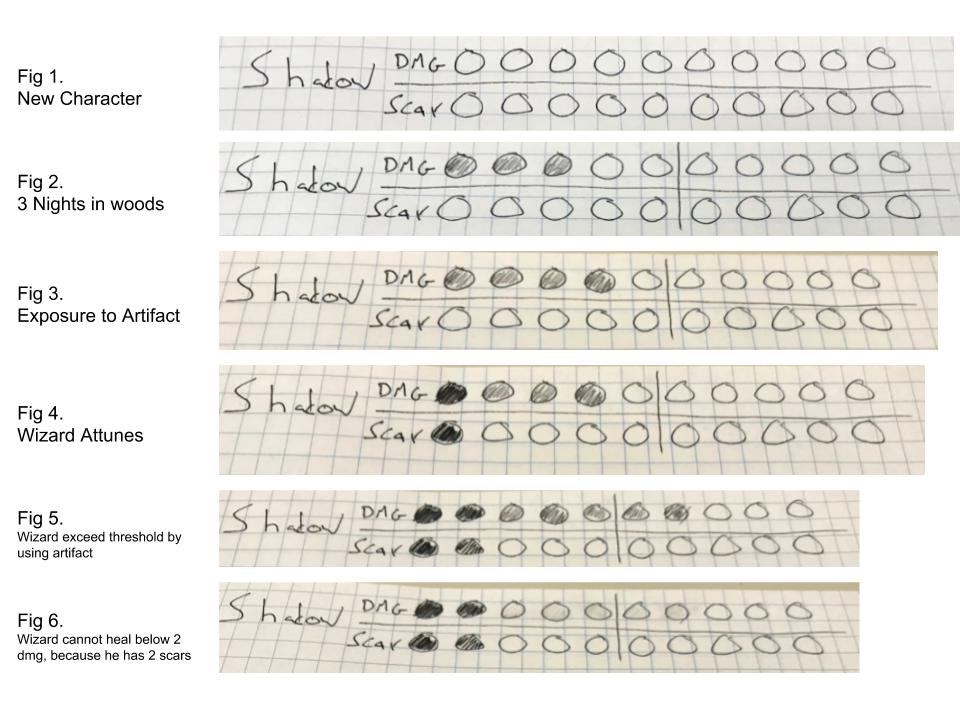 Art cropped from an Eric He image

Indie RPG Publisher with a punk rock fuck all attitude!

Blog of Judd Karlman from Daydreaming about Dragons

Urban adventuring and all that baggage